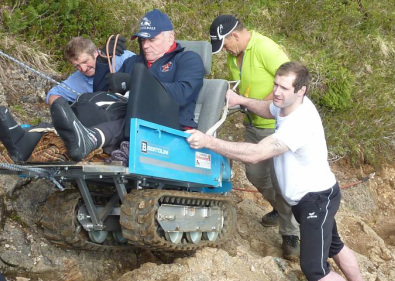 The link below shows Sepp Margeriter being hauled to the top of the Gratlspitze, the mountain behind Alpbach, to play at a service there earlier this year.  The video clips are worth watching.

If the ascent looks frightening just think about the descent!

There is a very poor quality "Google translation" below the clip

Our thanks to Alicia Good for forwarding the clip.

INCREDIBLE CAMARADERIE ...
Such a company like this, it would have probably not given in Tirol: Friends and Bergkameraden of known Alpbachers Sepp Margreiter sitting for 15 years with paraplegia in a wheelchair, have transported the musician of the Alpbach blower with a special vehicle on the Gratlspitz .
This has always been ardent desire of Sepp Margreiter, again with his friends, the mountain mass on the Gratspitz - musically frame the border mountain between the Wildschönau and Alpbach. And on Sunday it was time. 6 man - at the top of the initiator of the action farmer and hunter Sepp Klingler - who steered the vehicle too, and Simon Arzberger, Peter Schießling, John Margreiter, Klaus Duftner and Hannes Mayr.
It started at 7.00 clock in the morning on the Brixlegg Holzalm, and at 10.15 clock one was on target. The joy was not only with Sepp Margreiter huge, but also with his friends. At the summit, there was spontaneous applause from the many visitors who all looked in disbelief at this sensational transport.
Father Franz Bach Maier said admiringly, "The way is the goal and if you what makes then the man is able to much". Prof. Peter Moser, chief of the Alpbach wind was the story unsprünglich not believe, and said "I have admiration of this great camaraderie."
Sepp Margreiter itself was overwhelmed on the Gratlspitz of the feelings. He thanked all who participated in this unique camaraderie action. "I've never had anxiety throughout the transport, the men have fully acquainted" Margreiter said.
With a nice Berggottedienst this memorable day went on the Gratlspitz to an end. And Sepp read his trumpet probably even brighter sound than usual, a joyous day for all who were there.